According to Tom Pelissero, Vikings WR Olabisi Johnson suffered a torn ACL during practice on Friday. 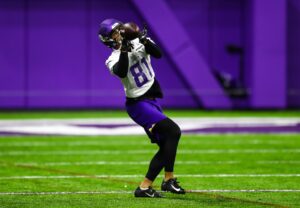 You can expect the Vikings to place Johnson on injured reserve in the coming days and sign someone to their rister.

Johnson, 24, was a seventh-round draft pick by the Vikings out of Colorado State in 2019. He signed a four-year, $2.6 million rookie deal with the team and is entering his third season with Minnesota.