According to Nicki Jhabvala, the Washington Football Team will place third-round CB Benjamin St-Juste on injured reserve this week. 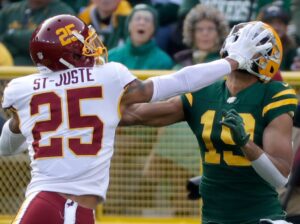 St-Juste had entered the concussion protocol again after initially suffering the injury in Week 4.

St-Juste, 24, is a native of Montreal, Quebec, and was a two-year starter at Minnesota and transferred from Michigan after missing the 2018 season due to injury. The Washington Football Team drafted him in the third round in 2021.

In 2021, St-Juste has appeared in nine games for Washington and recorded 26 total tackles, no interceptions and three pass deflections.