Adam Schefter reports that Washington is re-signing OT David Sharpe to a one-year contract on Wednesday. 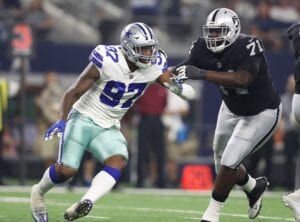 Sharpe, 25, is a former fourth-round pick of the Raiders back in 2017. He was waived coming out of the preseason and later signed on to the Texans’ practice squad after clearing waivers.

Houston promoted Sharpe to their active roster before waiving in 2018. From there, he was claimed off of waivers by the Raiders and re-signed to a one-year deal as a restricted free agent last year.

However, Las Vegas later traded Sharpe to Washington at the start of the 2020 season.