The Washington Football Team announced Friday that S Deshazor Everett was injured in a car accident Thursday night and has serious, but non-life-threatening injuries.

A passenger in the car tragically lost their life.

According to the Washington Post, Everett was driving a Nissan GT-R when the vehicle hit several trees and rolled over. 29-year-old Olivia Peters of Las Vegas has been identified as the passenger who lost their life.

Everett, 29, originally signed on with the Buccaneers as an undrafted free agent out of Texas A&M back in 2015. He lasted just a few months with Tampa Bay before signing with Washington.

Washington waived Everett at the start of the 2015 season and he’s remained with the team ever since.

In 2021, Deshazor Everett has appeared in 14 games for Washington and recorded seven tackles and no interceptions. 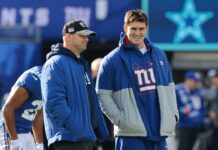