According to Adam Schefter, the Washington Football Team is signing TE Ricky Seals-Jones. 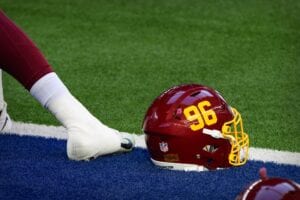 The veteran provides another option to compete for a depth role on Washington’s roster.

Seals-Jones, 26, signed on with the Cardinals as an undrafted free agent out of Texas A&M back in 2017. He was among Arizona’s final roster cuts coming out of the preseason and later signed on to the team’s practice squad.

Seals-Jones returned to Arizona in 2019 on an exclusive rights deal, but was waived and later claimed off waivers by the Browns. Cleveland declined to tender him a restricted offer in 2020 and he eventually signed on with the Chiefs.

In 2020, Seals-Jones appeared in two games for the Chiefs, but did not catch his lone target.