According to Ian Rapoport, the Washington Football Team is waiving RB Bryce Love. 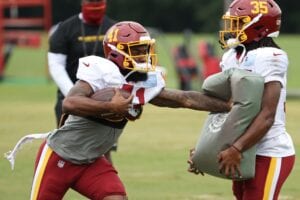 Love has spent the past two seasons on various injured lists for Washington, as he’s suffered multiple setbacks in his recovery from a torn ACL in college.

Love, 23, is a former fourth-round pick of Washington back in 2019. He was entering the third year of his four-year, $3.3 million contract.