Adam Caplan reports that CFL star WR Eric Rogers worked out for three more teams this week including the Steelers, Ravens and Redskins.

Rogers, 23, originally signed on with the Cowboys as an undrafted free agent out of Cal Lutheran back in 2013. However, he lasted just a few months in Dallas before he was waived during the preseason.

Rogers has worked out for several teams including the 49ers, Patriots, Chargers, Eagles, Vikings, Browns, Texans, Jets and Bears over the past few months, so there appears to be a great deal of interest in him right now.

It seems like that Rogers would have to sign a future/reserve contract with a team and compete for a roster spot next summer.

While playing for the Calgary Stampeders, Rogers recorded 87 catches for 1,448 yards and 10 touchdowns. 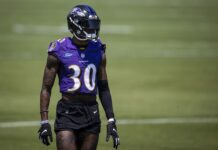