Zak Keefer of the Indianapolis Star takes a look at some Colts’ players who could be let go or brought back for the 2016 season in his latest article. 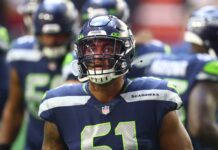