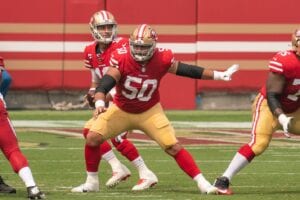 Grasu had a brief stint with the Ravens in 2018 before signing on with the Dolphins in December. He was waived a few weeks later and eventually signed by the Titans.

He had a brief stint with the Ravens before catching on with the 49ers this summer.

In 2020, Grasu has appeared in nine games for the 49ers, making three starts for them.