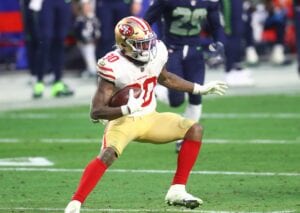 Wilson, 25, wound up going undrafted out of North Texas back in 2018. He later signed a three-year, $1.71 million contract with the 49ers, but was waived coming out of the preseason.

Wilson has been on and off the 49ers practice squad and active roster the past few seasons, seeing spot duty as a reserve and special teamer due to injuries ahead of him on the depth chart.