According to Matt Maiocco, the 49ers signed S Kai Nacua to their practice squad on Friday and released LB Rashad Smith in a corresponding move. 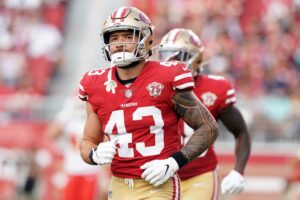 Nacua, 26, wound up signing a three-year, $1.66 million contract with the Browns as an undrafted free agent out of BYU back in 2017. He was cut loose coming out of the preseason and spent the season on Cleveland’s practice squad.

In 2020, Nacua appeared in five games for the 49ers and recorded one tackle.

During college career at BYU, Nacua recorded 165 tackles, 14 interceptions with two behind returned for touchdowns, 12 pass defenses, a forced fumble and a recovery over the course of 38 games and four seasons.