The 49ers and LB Dre Greenlaw have agreed on a two-year extension that will keep him in San Francisco for the near future, according to Ian Rapoport. 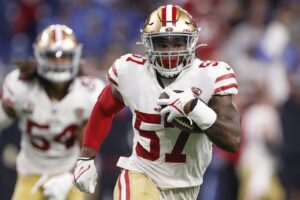 Greenlaw was scheduled to become a free agent in 2023.

Entering today’s game, Greenlaw had appeared in one game for the 49ers and recorded five total tackles.

We’ll have more regarding Greenlaw as the news is available.