The Panthers have already confirmed that they are, in fact, signing veteran CB A.J. Bouye.

The deal is worth $7 million over two years, Ian Rapoport later reported.

Mike Klis of 9 News reports that the Panthers are nearing an agreement with free agent CB A.J. Bouye on Wednesday. 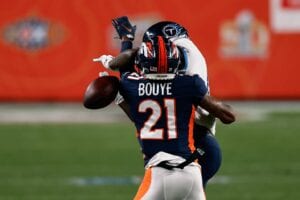 Since becoming a free agent, Bouye has visited with the Bengals and Raiders. However, it appears as though the Panthers could be his best option in the end.

It’s worth mentioning that signing Bouye to a contract won’t impact a team’s 2022 compensatory picks, given that he was released this offseason.

Bouye later departed for a five-year, $67.5 million with the Jaguars. However, Jacksonville opted to trade him to the Broncos last offseason. He was set to make a base salary of $13 million in 2021 when he was released by the Broncos

In 2020, Bouye appeared in seven games for the Broncos and recorded 23 tackles, no interceptions and six passes defended.