Despite stumbling to a 2-3 start to the season, Browns QB Baker Mayfield says the team isn’t pushing the panic button after a 31-3 loss on Monday night to the 49ers. With the Seahawks and Patriots on deck with one loss between them, though, it could get worse for the Browns before it gets better.

“Once again, we’re not hitting the panic button,” Mayfied said via Pro Football Talk. “For us, we know the problem. We know we have to be better and do better. When you play a great team, you have to eliminate mistakes. You just have to. We know exactly what we need to do. We need to play well. We need to do our job each and every play.”

After a white-hot start to the season, Ravens QB Lamar Jackson has cooled off the last two weeks. Jackson started the year with seven touchdown passes to no interceptions, extending his streak of passes without an interception to 248 dating back to last season. In the last two games, Jackson has four touchdown passes to five interceptions. However, the Ravens aren’t concerned, as at 22 Jackson is among the youngest starting quarterbacks in the league and has yet to start even a full season’s worth of games.

“Lamar is going to tell you that he needs to play a lot better, and there are so many things that he can learn from that game,” Ravens HC John Harbaugh said via ESPN’s Jamison Hensley. “He’s starting his 12th game. He’s in his first season. He’s learning leaps and bounds every single week because you see new things all the time. He’ll be doing that throughout his career. But I think now is when it’s the steepest, and he learns fast. That’s good for us.”

A few reports emerged this week linking Steelers HC Mike Tomlin to the vacant Redskins head coaching position. Tomlin is reportedly at the top of Washington owner Dan Snyder‘s list, but just signed a contract extension through 2021 in July. As long as Tomlin is under contract in Pittsburgh, the only way Snyder can acquire him is via trade. Tomlin didn’t have much to say about the report, though because of tampering regulations he’d be limited in what he could say even if he did have interest.

“I’m not worried about that, to be quite honest with you,” Tomlin said via ESPN’s Brooke Pryor. “I’m the head coach of a 1-4 football team going on the road to face a Hall of Fame quarterback with my third-string quarterback. Do you think I’m worried about anything but that?” 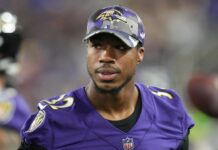