Bengals LT Jonah Williams spoke about the team’s play last season and how they fell short in the Super Bowl to the Rams.

“We didn’t play well enough,” Williams said, via Kelsey Conway of the Cincinnati Enquirer. “I think that’s obvious when you look at the stats and look at the outcome of the game. I think everyone in the locker room understands that and we know we want to get to that stage again and we want to perform a lot better the next time that we’re there so that’s our goal, that’s what we’re working towards. . . . We know that the offense — the type of playmakers that we have with Joe at quarterback and our receivers and running backs and everyone that we have — if we do our job well it’s going to allow everyone else to shine. That’s kind of what we do as linemen, so going into this year we want to see those numbers get down. The way we approach it we just want help our offense run more smoothly and that would involve giving Joe more time back there.” 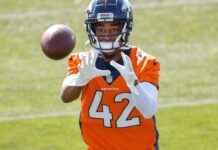