Browns HC Hue Jackson says “there’s a chance” WR Josh Gordon will be ready for the start of the regular season, but they’re taking it “day by day.”

“There’s a chance,” Jackson said, via Cleveland.com. “Obviously, we’re just going to take it one step at a time. His focus is going to be on meetings and conditioning, and then we’ll just kind of go from there. Hopefully, we can get him up and running by the first game.

“We’re going to take it day by day,” Jackson added. “We’ve not been around him in quite a while. He needs to be back with his teammates and we have to see how that all unfolds, back around the coaches and just getting him back integrated into our system and into how we go about doing things here every day and getting him back to playing football.” 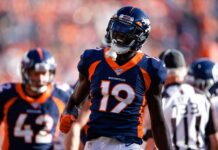