The defining play of Bengals G Michael Jordan‘s career so far has been the sack he allowed in Week 11 that resulted in a torn ACL for promising QB Joe Burrow. It stung extra because Jordan and Burrow are good friends going back to their time together at Ohio State. Not letting that one play define him has become Jordan’s motivation this offseason.

“First thing I did was I apologized to Joe,” Jordan said via the  Athletic’s Paul Dehner Jr. “I told him he was not going to hear any more words from me. Just actions. I can tell him I’m going to do better. He doesn’t want to hear that. He wants to see it. I’ll prove what I’m saying and my convictions this upcoming season. Not a whole lot of talking; I’m just going to show it.”

Jordan has put in a ton of work this offseason. He has rebuilt his body, losing 30 pounds to dip below 300, then adding back 20 pounds of muscle with intent to add another 10 by the start of training camp. He’s trained with former Bengals legendary lineman Willie Anderson and the addition of OL coach Frank Pollack is expected to be a positive for him as he competes for a job.

“I’m very positive about Michael Jordan,” Bengals HC Zac Taylor said. “It hasn’t been perfect on offense for any of us. So going into Year 3, it’s a big year for Mike. I think he’s taken the right approach. He’s done a great job listening to what Frank’s asked him to do. … Last year, you watch him, he had some tough matchups. That’s what this league is about. There’s some really good D-tackles, and it seemed like he found some really good ones about five weeks in a row at one point. But that’s life in the NFL, and you’ve got to be consistent.”

Steelers’ WR JuJu Smith-Schuster spoke about the tumultuous offseason he went through in free agency, including a potential departure from Pittsburgh that never came to fruition.

“Everything that happened this year was different with the cap being low and everything, so next year is a year where the cap will be so much better and knowing I will be on the market again and knowing every team would want to offer something (closer) to what my value is,” Smith-Schuster said, via Mark Kaboly of The Athletic. “Regardless, I’ve got to go out there and do what I have to do and put things on tape to make my value even better.”

Smith-Schuster said his goal was to play outside more often this season and adds he hasn’t had a conversation with new OC Matt Canada yet.

“Playing more outside, it is as simple as that,” Smith-Schuster said. “To be honest, I haven’t even had a conversation with (new offensive coordinator) Matt (Canada) about playing outside, but there have been plays in OTAs that he put me outside or in the best situation getting the ball outside. I still don’t mind playing inside (more) than outside. How we do it is that we move around. You can never really tell if I am the No. 3 receiver as the slot, but playing outside so it all varies.”

In the long run, Smith-Schuster is now more comfortable returning to the same system instead of joining the AFC North rival Ravens in order to make more money in 2021.

“To come back for another four years and have nine years as a Pittsburgh Steeler would be tremendous and remarkable,” Smith-Schuster said. “It would be unheard of from a receiver standpoint. Don’t get it wrong, Pittsburgh is still an option on the table, and they will fight hard, and I know they are one of the teams that have the most cap space. A lot of people are playing on a one-year deal, so you better play your butt off because you never know what’s going to happen. I prefer everyone taking a one-year deal until things get better and then going back into the market and hitting it for more or a bigger prize. For me, a couple of million. I am looking at the bigger picture going into next year. It just makes everything easier on me this year going into next year and making free agency a lot better.” 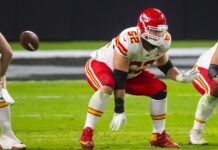