Jets DL Sheldon Richardson responded to the news that he’ll be suspended for the first game of the 2016 season by saying he was “grateful”, considering it could have been a longer suspension.

“So the league has sent down there decision,” Richardson wrote on his Instagram account. “I have to live with it. I’m grateful, it could have been more but this is overspill from a silly offseason on my part but I’ve grown from it been pass [sic] it. … I’m still smiling like its draft day. … to my family and fans I love ya.”

Browns CB Jamar Taylor, who was acquired in a draft trade with the Dolphins, says he’s looking forward to a “fresh start” in Cleveland.

“It’s definitely a fresh start for me. For what I went through in Miami, it’s all over. This is a great group of people here, a great organization, a great staff,” Taylor said, via ClevelandBrowns.com. “Nobody knows me, I know nobody. It’s just really new for me. It’s definitely a fresh start, but it’s a fresh start for everybody. None of the coaches really know a lot of these guys so everybody knows they just have to go put it on tape. You are who you put on tape and you are who you are around your teammates.” 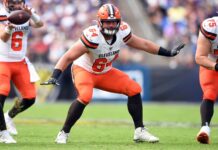 186,605FansLike
7,623FollowersFollow
276,229FollowersFollow
© NFLTradeRumors.co is an independent news source and has no affiliation with the National Football League (NFL), NFL.com, or any team(s).
wpDiscuz