According to Adam Schefter, the Bears have also fired GM Ryan Pace on Monday. 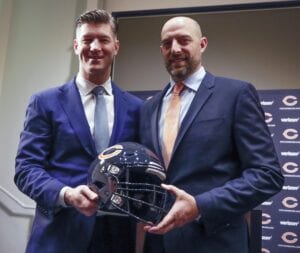 Chicago already fired HC Matt Nagy, which was widely expected for months. There had been some thought that Pace could survive to hire a third head coach but it appears the Bears are electing for a clean sweep.

Pace, 44, began working for the Saints as an operations assistant back in 2001. He worked his up through the scouting department to director of player personnel before departing to become the Bears general manager in 2015.

During his tenure in Chicago, Pace has led the Bears to a record of 48-65 (42.4) percent and two playoff appearances.

We’ll have more on the Bears as the news is available.