The Chicago Sun Times reports that the Chicago Bears are “expected” to sign WR Roy Williams.

Vaughn McClure of the Chicago Tribune reports that the Chicago Bears have “started their pursuit” of recently released WR Roy Williams.

Chicago was rumored to be an option for Williams once he was released and the Bears are in need of a large receiving option. Obviously Mike Martz is looking for pieces that will work with his offensive scheme and the Greg Olsen experiment didn’t pay dividends for them last year. 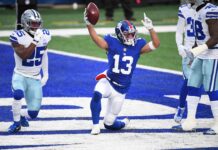