According to Adam Schefter, both Bears QB Nick Foles (hip) and Mitchell Trubisky (shoulder) are still dealing with ailments this week. 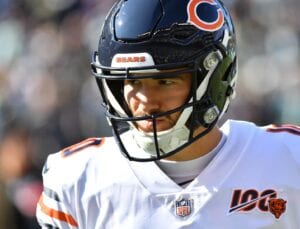 Bears HC Matt Nagy declined to name a starter for this Sunday’s game against the Packers. But he did say a change in who starts is still “on the table.”

Chicago benched Trubisky for Foles earlier this season and declared him the starter the rest of the season. However, the veteran Foles has struggled in recent weeks before being injured and the Bears lost four straight games before their bye this past week.

Whichever quarterback is healthiest could determine who gets the start in Week 12.

Foles, 31, is a former third-round pick of the Eagles back in 2012. Philadelphia traded Foles to the Rams back in 2015 in a deal for QB Sam Bradford and he later signed an extension with the team.

From there, Foles signed a four-year, $88 million contract with the Jaguars that included $50.125 million guaranteed. He was traded to the Bears this offseason.

In 2020, Foles has appeared in eight games for the Bears and completed 65 percent of his pass attempts for 1,852 yards, 10 touchdowns and eight interceptions.

The Bears declined Trubisky’s fifth-year option this past offseason, making him set to be an unrestricted free agent in 2021.

In 2020, Trubisky has appeared in four games for the Bears and completed 51-86 of his passes for 560 yards, six touchdowns and three interceptions to go along with nine attempts for 90 yards rushing.

We’ll have more on the Bears quarterback situation as the news is available.