According to Albert Breer of SI.com, the Chicago Bears will interview Colts safeties coach Alan Williams for their defensive coordinator job. 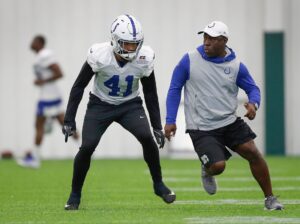 Williams has obvious ties to new Bears’ head coach Matt Eberflus from their time together in Indianapolis.

You can expect more names to be added to the Bears’ list of defensive coordinator candidates.

Williams, 52, began his coaching career back in 1992 as the assistant HC/RBs coach at Norview High School. He took his first college job as the RBs coach at William & Mary.

The Buccaneers later hired Williams as a defensive assistant in 2001. From there, He spent 10 years as a DBs coach for the Colts before a brief stint as the Vikings’ defensive coordinator.

After four years with the Lions, Williams returned to the Colts as their DBs/Safeties coach in 2018.