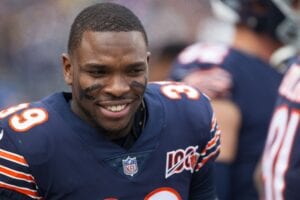 Jackson, 27, is a former fourth-round pick of the Bears back in 2017. He was entering the final year of his four-year, $3.067 million contract when he agreed to a four-year, $58.4 million extension with the Bears this offseason.

In 2020, Jackson has appeared in 10 games for the Bears and recorded 58 tackles, no interceptions, three forced fumbles, a recovery, a defensive touchdown and two passes defended.

190,746FansLike
7,623FollowersFollow
275,136FollowersFollow
© NFLTradeRumors.co is an independent news source and has no affiliation with the National Football League (NFL), NFL.com, or any team(s).
wpDiscuz
You are going to send email to
Move Comment