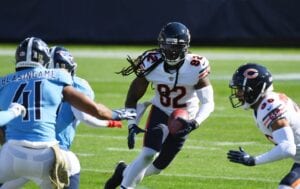 The expectation is that Harris will miss the remainder of the season with this injury.

Harris was serving as the Bears’ punt returner, but they opted to claim DeAndre Carter off of waivers from the Texans yesterday, so he could take over those duties moving forward.

Harris, 33, is a former sixth-round pick of the Cowboys back in 2011. He spent four years in Dallas before signing a five-year, $17.5 million contract that included $7.1 million guaranteed with the Giants in 2015.

Harris was released by the Giants and later agreed to a one-year contract with the Raiders. Las Vegas brought Harris back last year before eventually placing him on injured reserve.

The Texans signed Harris to their practice squad last month before eventually opting to release him. He signed with Chicago a few weeks ago.

In 2020, Harris appeared in three games for the Bears and totaled 81 punt return yards.