He adds the Bears are optimistic Montgomery has avoided a serious injury, though the evaluation is ongoing.

Bears HC Matt Nagy confirmed the injury is to Montgomery’s groin, though the team still does not know the severity, per Kevin Fishbain.

The team claimed via Adam Schefter that Montgomery did not need to be carted off and instead walked off the field on his own.

According to Brad Biggs, Bears RB David Montgomery needed to be carted from Wednesday’s practice after suffering an apparent non-contact injury to his left leg. 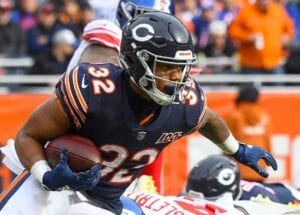 Montgomery slipped while taking a handoff in drills. He immediately appeared to be in considerable pain and had to leave practice.

The team does not believe it to be a knee injury, per Adam Caplan.

More updates are coming with details of Montgomery’s injury but the initial reports appear to indicate it’s not a minor injury.