Todd Archer of ESPN reports that the Chicago Bears have requested permission to speak with Cowboys senior defensive assistant George Edwards regarding their defensive coordinator opening. 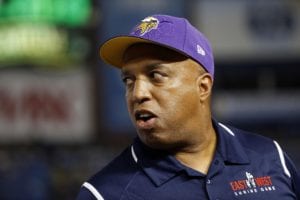 The Bears have also requested an interview with Colts DB Coach Jonathan Gannon. Meanwhile, some internal candidates for the job include safeties coach Sean Desai and DL coach Jay Rodgers among others.

Edwards, 54, began his coaching career back in 1991 as an assistant at Florida. He worked for a few colleges before accepting the LBs coaching job with the Cowboys in 1998.

Since then, Edwards has worked for a number of NFL teams including the Redskins, Browns, Dolphins and Bills before the Vikings hired him as their defensive coordinator in 2014.

Minnesota moved on from Edwards last year and he later joined the Cowboys’ defensive staff.

We’ll have more regarding Bears’ defensive coordinator job as the news is available.