The Chicago Bears announced that they signed veteran pass-rusher Bruce Irvin to their practice squad on Friday.

Ian Rapoport reports that the Chicago Bears are signing veteran pass-rusher Bruce Irvin to a contract. Rapoport adds that the Bears are looking for help with LB Khalil Mack currently injured. 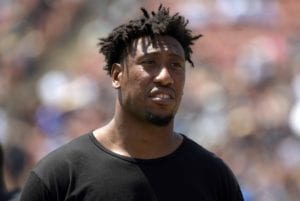 Irvin, 34, is a former first-round pick of the Seahawks back in 2012. He spent four years in Seattle before signing a four-year, $37 million contract that included $19 million guaranteed with the Raiders in 2016.

The Raiders cut Irvin loose in 2018 and he later signed on with the Falcons and finished out the season in Atlanta. From there, he agreed to a one-year deal with the Panthers for 2019 and returned to the Seahawks on a one-year deal in 2020 before missing the remainder of the season with a torn ACL.