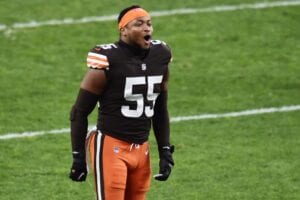 Davis, 26, was signed by the Giants as an undrafted free agent out of Chattanooga in 2018. He signed a three-year $1.71 million deal and was able to make the team’s final roster as a rookie.

The Giants later elected to waive Davis and he was claimed by the Browns. He primarily played on their special teams unit and was not tendered as a restricted free agent in 2021.

He signed with the Texans as an unrestricted free agent but was waived with an injury designation during camp. David had a brief stint with the Raiders this summer.

In 2020, Davis appeared in 13 games for the Browns, recording seven tackles.