According to Ben Baby, the Bengals activated DE Khalid Kareem from their injured reserve on Friday. 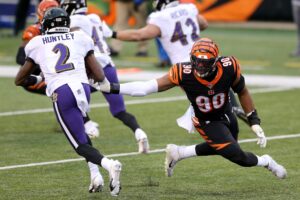 Cincinnati designated him as a player to return in recent weeks.

Kareem, 23, was a two-year starter at Notre Dame where he was a team captain, before being selected in the fifth round of the draft by the Bengals in 2020.

In 2020, Kareem appeared in all 16 games for the Bengals, recording 19 total tackles and one sack.