Anderson missed his final year of college last season at Oklahoma with a torn ACL in that same knee. He fell to Cincinnati in the sixth round because of his extensive injury history, including a neck injury in 2016 and an ankle injury in 2015.

During his college career at Oklahoma, Anderson rushed for 1,285 yards on 200 carries (6.4 YPC) to go along with 17 receptions for 281 yards receiving and 21 touchdowns over the course of 17 games. 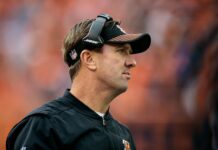 152,596FansLike
7,623FollowersFollow
239,785FollowersFollow
© NFLTradeRumors.co is an independent news source and has no affiliation with the National Football League (NFL), NFL.com, or any team(s).
wpDiscuz