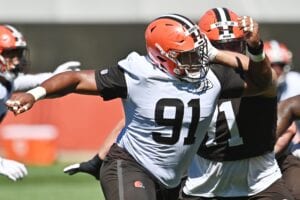 Ankou, 28, originally signed on with the Texans as an undrafted free agent out of UCLA back in 2017. He spent just over four months in Houston before he was waived at the start of the regular season and later claimed by the Jaguars.

From there, Ankou had brief stints with the Texans, Cowboys, Falcons, Bills, and Falcons before signing on with the Steelers. He spent last year with the Bills and Titans before returning to Buffalo on a futures contract this past February.

In 2021, Ankou appeared in six games for the Titans and Bills and recorded 12 tackles and a sack.