According to Ian Rapoport, the Bills are expected to approach QB Josh Allen at some point this spring or summer regarding a contract extension. 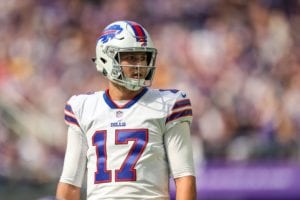 Rapoport expects Allen’s next contract to make him one of the highest-paid quarterbacks in the NFL and it’s possible he could be highest-paid.

The salary cap could impact talks to some degree and the Bills will obviously pick up his fifth-year option in the coming months.

Allen has put together an MVP caliber season in Buffalo and deserves to be paid as one of the top quarterbacks in the league. It will be interesting to see the numbers being discussed between the two parties, considering that the salary cap concerns teams will likely be navigating this offseason.

The contract includes a fifth-year option for the Bills to pick up in 2021.

In 2020, Allen appeared in all 16 games for the Bills and completed 69.2 percent of his passes for 4,544 yards, 37 touchdowns, and 10 interceptions. He also rushed for 421 yards and eight touchdowns for Buffalo.

We’ll have more regarding a new deal for Allen as the news is available.

190,681FansLike
7,623FollowersFollow
275,136FollowersFollow
© NFLTradeRumors.co is an independent news source and has no affiliation with the National Football League (NFL), NFL.com, or any team(s).
wpDiscuz
You are going to send email to
Move Comment