The Buffalo Bills announced Saturday that they’ve placed TE Tyler Kroft on the COVID-19 list after he produced a positive test. 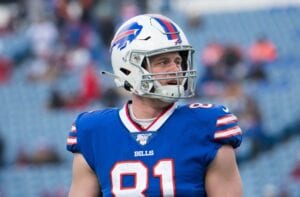 Kroft, 28, is a former third-round pick of the Bengals back in 2015. He finished the final year of his four-year, $2,971,276 rookie contract and became an unrestricted free agent.

In 2020, Kroft has appeared in 10 games for the Bills and caught 12 passes for 119 yards and three touchdowns.