Adam Schefter reports that the Dolphins trading the No. 3 overall pick to the 49ers for draft compensation. 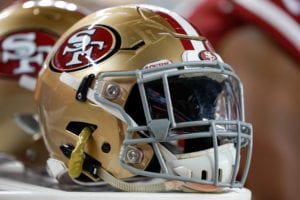 According to Schefter, the 49ers did not trade up with one quarterback in mind and instead made the move because they’re good with the options that will be there at No. 3.

The 49ers could still draft a quarterback with the No. 3 pick, but Schefter says San Francisco plans to hold on to QB Jimmy Garoppolo and has no intention of trading him.

While that may be the case, rumors have circulated for months about Garoppolo possibly being traded this offseason and it’s hard to imagine that the 49ers would make this aggressive of a trade for a non-quarterback.

Trevor Lawrence is widely expected to go No. 1 overall and the Jets could follow by using the No. 2 overall pick on Zach Wilson. This would leave the 49ers position to take either OSU QB Justin Fields or North Dakota State QB Trey Lance at No. 3.

Of course, it’s possible the Jets hold onto Sam Darnold and either trade the No. 2 pick or take a player at a different position, which would give the 49ers a shot at Wilson. However, the overall expectation has been that the Jets will likely either take a quarterback or trade back with another team moving up for one of the top quarterback prospects.

As for the Dolphins, this is further indication that they’re all-in on Tua Tagovailoa. No team has been as good as the Dolphins in terms of acquiring high-end draft picks and they’ve managed to flip the pick they got from the Texans for LT Laremy Tunsil into another huge package of draft picks to build out their roster in the years to come.

We’ll have more regarding the 49ers’ and Dolphins’ draft plans as the news is available.