Ian Rapoport of NFL Media reports that the Rams have re-worked DT Aaron Donald‘s contract and included a $40 million raise through 2024. 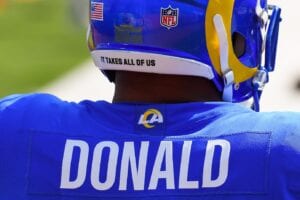 Donald had three years remaining on his contract but he will not make a total of $95 million over that span.

This deal makes Donald the highest-paid non-QB in NFL history.

Donald had indicated that he was willing to retire if the Rams did not work out a new contract. However, indications have been that Los Angeles was going to do what it takes to keep their star defensive lineman happy for the foreseeable future.

Donald has three years remaining on his deal with base salaries of $9.25 million, $14 million and $14 million.

In 2021, Donald appeared in all 17 games for the Rams, recording 84 total tackles, 19 tackles for loss, 12.5 sacks, four forced fumbles and four pass deflections.