According to Mark Berman, the Texans have decided to fire HC David Culley. 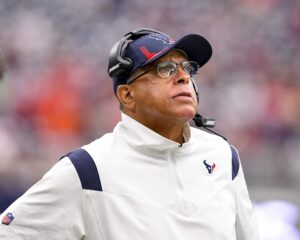 The team was engaging in a thorough evaluation of its organization, despite reports that Culley appeared to be safe.

This was never going to be a successful year for the Texans given the state of their roster but Culley arguably did well to win as many games as Houston did the year before with a rookie quarterback in Davis Mills and no Deshaun Watson.

In the end, it appears GM Nick Caserio has decided to move on after just one season out of Culley.

Culley, 66, began his coaching career back in 1978. From there, he worked for a number of schools before the Buccaneers hired him as their WR coach in 1994.

From there, Culley worked as an assistant for the Steelers, Eagles, Chiefs and Bills before the Ravens hired him for the 2019 season. The Texans hired him to be their head coach in 2021.

Culley finished his first and only season with a record of 4-13 with the Texans.

We’ll have more on the Texans’ search for a new head coach as the news is available.