According to Tom Pelissero, the Vikings have fired GM Rick Spielman. 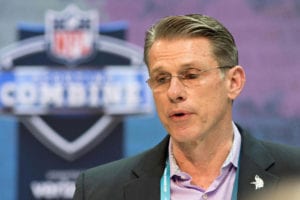 It was clear changes were coming after the Vikings missed the playoffs again this season. Zimmer’s job seemed in danger but the decision to fire both him and Spielman, who seemed like he could have been safe, indicates ownership is ready for seismic changes.

Zimmer, 65, began his NFL coaching career with the Cowboys back in 1994 as their DBs coach. He worked his way up to defensive coordinator and had stints with the Falcons and Bengals before the Vikings hired him as their head coach in 2014.

Minnesota signed Zimmer to a three-year extension last July as he entered a “lame duck” season in the final year of his contract.

During his eight years as Vikings head coach, Zimmer has led the team to a record of 72-56-1 (56.2 percent), which includes three playoff appearances and one trip to the NFC Championship game in 2017.

Spielman, 58, played two seasons for the Chargers and Lions before eventually taking a scouting job with the Lions in 1990. From there, Spielman worked for the Bears and Dolphins and eventually worked his way up to general manager in 2004.

The Vikings eventually hired Spielman as their VP of player personnel in 2006. After six years in the position, Spielman was elevated to general manager in 2012.

During his tenure, Spielman has led the Vikings to a record of 132-123-2 dating back to 2006, which includes six playoff appearances.

We’ll have more on the Vikings as the news is available.