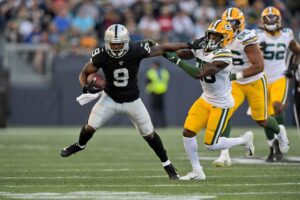 Pierson-El, 25, signed with Washington as an undrafted free agent out of Nebraska in 2018, but was cut a few weeks later. He spent some time in the Canadian Football League with the Montreal Alouettes before catching on in the AAF.

Pierson-El played in 2019 with the now-defunct Salt Lake Stallions before signing on with the Raiders. He spent each of the past two seasons on their practice squad.

The Broncos initially signed Pierson-El in June, but released him during final cuts.

During his time with the Stallions, Pierson-El recorded 36 receptions for 414 yards (11.5 avg.) and one touchdown.