The Denver Broncos elevated ILB Curtis Robinson to their active roster on Saturday for Week’s game against the Ravens, according to Ryan O’Halloran. 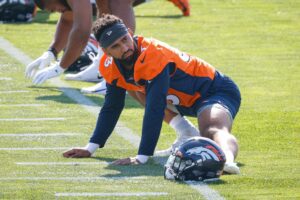 Mike Klis confirms the news and adds that the Broncos are also promoting OL Austin Schlottmann.

This comes a day after Broncos ILB Baron Browning was added to the injury report.

Robinson, 23, wound up going undrafted of Stanford back in April. He later signed a three-year, $2.4 million contract with the Broncos.

Denver waived Robinson coming out of the preseason before re-signing him to their practice squad.

During his college career at Stanford, Robinson recorded 143 tackles, four sacks, an interception, three forced fumbles, a recovery and five pass deflections over the course of four seasons and 31 games.