According to Mike Klis, Broncos LB Jonas Griffith will miss four to six weeks after suffering a dislocated elbow in Saturday’s preseason game. 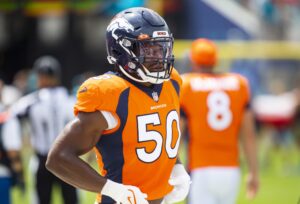 The injury will likely carry over into the regular season, which is a bit of a blow for Denver and Griffith since he had been playing with the starters.

Griffith, 25, signed with the 49ers as an undrafted free agent out of Indiana State following the draft in April of 2020, but San Francisco later opted to waive him.

Griffith caught on to the Colts’ practice squad briefly before returning to the 49ers’ practice squad and signing a futures deal with the team. However, the 49ers traded him to the Broncos coming out of the preseason.

Denver re-signed Griffith as an exclusive rights free agent for the 2022 season.

In 2021, Griffith appeared in 13 games for the Broncos and recorded 46 tackles and one fumble recovery.