Mike Klis reports that the Broncos are promoting RB Devine Ozigbo to the active roster, as well as elevating WR Brandon Johnson and CB Faion Hicks for their game against the Panthers. 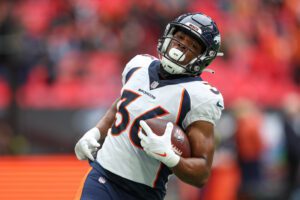 Ozigbo, 26, originally signed with the Saints as an undrafted free agent out of Nebraska in 2019. He was waived coming out of the preseason and claimed off waivers by the Jaguars.

Ozigbo had signed a futures deal with the Patriots for the 2022 season before they decided to let him go. He signed on with the Saints this past May.

From there, the Saints waived Ozigbo back in August, and was later claimed by the Broncos. The Broncos released him prior to the start of the season and opted to bring him back to their practice squad. Denver recently waived Ozigbo again.

In 2022, Ozigbo has appeared in two games for the Broncos. He has rushed for two yards on one carry.