Ryan O’Halloran of the Denver Post reports that the Broncos are trading CB Isaac Yiadom to the Giants for a 2021 seventh-round pick. 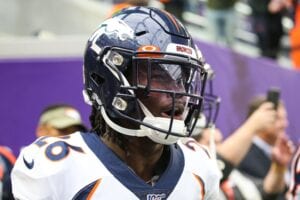 O’Halloran explains that Yiadom was squeezed out of the mix by De’Vante Bausby, Davontae Harris and Essang Bassey.

In 2019, Yiadom appeared in 16 games for the Broncos and made eight starts, recording 43 tackles and four pass deflections.