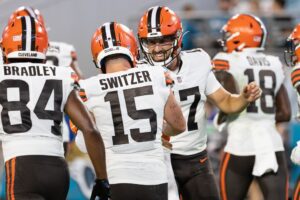 Switzer, 26, is a former fourth-round pick of the Cowboys back in 2017. He spent just over a year in Dallas before being traded to the Raiders, but was dealt again to the Steelers just a few months later.

Switzer was entering the final year of his four-year, $2.96 million rookie contract and was set to make a base salary of $735,000 for the 2020 season when Pittsburgh cut him loose back in September. He had a brief stint with the Bengals before signing on with the Browns this past January.

In 2019, Switzer appeared in nine games for the Steelers and caught eight passes for 27 yards receiving and no touchdowns. He also totaled 166 kick return yards and 29 punt return yards.