The Cleveland Browns are re-signing WR/KR JoJo Natson to a contract on Thursday, according to Scott Petrak. 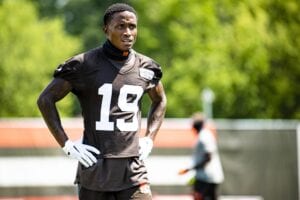 Natson is working his way back from a torn ACL he suffered last year.

Natson, 27, originally signed on with the Colts as an undrafted free agent out of Akron back in 2017. He lasted just a few months in Indianapolis before being waived at the start of the season.

Natson later signed on to the Jets’ practice squad before the Rams signed him in 2018. Natson returned to Los Angeles on an exclusive rights contract last year but was placed on injured reserve in December.

Natson signed a one-year deal with the Browns last year.

In 2020, Natson appeared in two games for the Browns and had no receptions. He recorded 14 punt return yards.