According to Mark Kay Cabot, the Browns and TE David Njoku are “very close” on an extension. 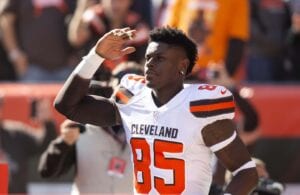 Cabot reiterates a previous report that Cleveland has an offer on the table to Njoku worth more than $13 million a year, which would put him in the top five in average annual value for his position.

The remaining holdup is guaranteed money, per Cabot. She says if the two sides can close that gap, a deal could be done as early as this week.

Njoku is not at OTAs as negotiations continue. The Browns placed the franchise tag on him earlier this offseason which is worth $10.9 million fully guaranteed.

The two sides have until July 15 to negotiate a long-term deal, otherwise Njoku must play out the 2022 season on the tag. Cabot believes that outcome is unlikely, though.

The Browns picked up Njoku’s fifth-year option last April for roughly $6 million for the 2021 season. He was set to be an unrestricted free agent in 2022 when the Browns franchise-tagged him.