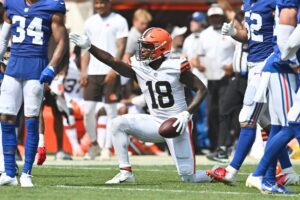 Davis, 24, signed with the Vikings as an undrafted free agent out of Sam Houston State in 2019. He was among Minnesota’s final roster cuts coming out of the preseason but signed on with their practice squad once passing through waivers unclaimed.

The Vikings later brought Davis back and promoted him to the active roster. He signed a futures deal with Minnesota in January of 2020 but was let go tjat August.

The Browns signed Davis to a contract in July, but Davis was suspended for the first two games of the season for a violation of the NFL’s substances of abuse policy.

In 2019, Davis appeared in two games for the Vikings but did not register a stat.