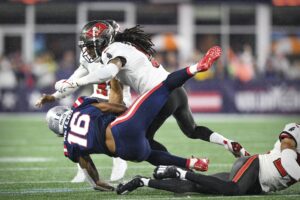 Sherman was determined to have suffered a Grade 2 calf strain during pregame warmups for Week 10 and expected to miss a few weeks as he recovers, so this doesn’t come as a big surprise.

This is unfortunate news given Sherman missed multiple weeks due to a hamstring injury just two games after signing with Tampa Bay.

The 49ers signed him to a three-year, $39.15 million contract and he was testing the open market as an unrestricted free agent this year before signing a one-year, $2.25 million deal with the Buccaneers.

In 2021, Sherman has appeared in two games for the Buccaneers and recorded ten tackles and one fumble recovery.