The Tampa Bay Buccaneers announced that they’ve signed G John Molchon to their practice squad and released WR Travis Jonsen from the unit. 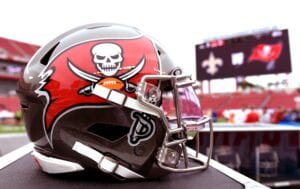 Molchon, 24, wound up going undrafted out of Boise State back in 2020. He later signed a rookie contract with the Buccaneers and was on and off of their practice squad last year.

The Buccaneers brought Molchon back on a futures contract before waiving him earlier in the week.

Molchon has yet to appear in an NFL game.