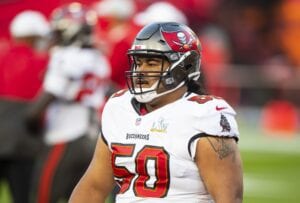 Vea is now under team control through the 2026 season.

The Buccaneers have already confirmed the news:

“Vita Vea has emerged as one of our league’s most disruptive interior defensive linemen due to a unique skillset that combines strength and superior athleticism,” said Buccaneers General Manager Jason Licht. “Vita’s abilities as both a premier run stuffer and pass rusher are rare, and his presence on the defensive front has played a major role in our ability to consistently rank among the league leaders in rush defense since his arrival. We look forward to having Vita remain a core piece of our defense for years to come and are excited to continue watching him develop into one of the best nose tackles in the NFL.”

The Buccaneers picked up Vea’s fifth-year option which will cost them $7.638 million fully guaranteed for the 2022 season.

In 2021, Vea has appeared in 15 games for the Buccaneers and recorded 31 total tackles, five tackles for loss, four sacks, one fumble recovery and three pass defenses.

Pro Football Focus has him rated as the No. 17 interior defender out of 127 qualifying players.