According to Greg Auman, the Buccaneers are waiving WR Tyler Johnson on Tuesday. 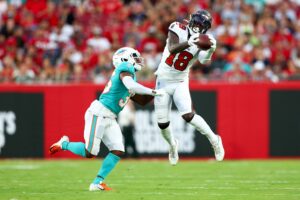 Johnson was thought to be a good candidate to make the team but Tampa Bay has a ton of depth at receiver and there evidently wasn’t room.

Johnson, 24, was a four-year starter at Minnesota and was named First-team All-Big Ten before being selected by the Buccaneers in the fifth round of the draft.